Suppose you are, say, the majority leader of the Democrat-controlled senate.  And suppose you are overseeing massive government deficits with no end in sight.  What do you do?

Here's an idea:  what if you ignore your constitutional duties and offer no budget?  Then no one can criticize your budget ideas because they don't exist, and at the same time you can attack the other party for its  budget ideas.

Wow, that's great what a scam!!!  And all you need is for an Accomplice Media to look the other way, by keeping most of its readers/viewers/listeners in the dark about the fact that it is happening.

With this in mind, here are the key excerpts of an editorial from yesterday's Investors Business Daily. See what you think of it:

Budget: Over the weekend, Senate Democrats passed a dubious milestone going 900 days without fulfilling their legal obligation to pass a budget. Worse is the fact that this gross dereliction of duty has gone largely unnoticed.

You have to go all the way back to April 29, 2009 just three months after President Obama took the oath of office to find the last time Senate Democrats managed to discharge their legal obligation to produce a budget plan.

That's right legal obligation. It says right in the Congressional Budget Act of 1974 that the Senate must produce a budget resolution by April of each year.

Instead, all the country has gotten from Senate Democrats are excuses.

So, without any budget plan to guide them, here's what Congress managed to do in the 29 months since the Senate last passed a plan:

Added $3.6 trillion to the national debt a stunning 32% increase.

Now it's the middle of October, with the debt deal done months ago, and there's still no Senate plan anywhere in sight. What's Reid's new excuse?

Turns out, he doesn't have to make one up, since the debt deal Obama signed in August lets the Senate off the budget hook for another two years.

According to a Democratic Policy and memo obtained by Commentary magazine in August, "One important but overlooked element of the bipartisan debt limit compromise is that it ... in effect, 'deems' a budget resolution passed for each of the next two fiscal years."

This, the memo says, "significantly reduces the chances of a sequel to last spring's government shutdown drama."

But what it really does is let Democrats continue to play political games with the budget, attacking serious, credible GOP proposals without ever having to offer anything concrete of their own.

Earlier this year, Obama said that "families across this country understand what it takes to manage a budget," and that "it's time acted as responsibly as our families do."

He's right. Except that it's members of his own party who refuse to act like responsible adults.

Is it my imagination, or would this information be of some importance to voters?  And if it would be, why have so many in our wonderful "neutral" media not been screaming about it for all this time?

The answer, of course, is because, for the most part, we do not have a neutral media.  We have an Accomplice Media.  And guess which side they are acting as accomplices for?

How can these people even pretend they are journalists?


HOW BIG IS ZUCCOTTI PARK?

For weeks now we have been told that the "Occupy Wall Street" protesters are filling Zuccotti Park in lower Manhattan.

But how big is Zuccotti Park, and how many people would it take to fill it?

Well here is a street view of the park.  Let's take a look-see: 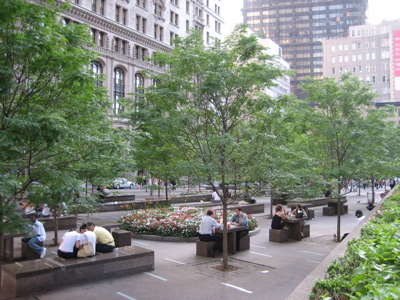 Wait a minute.  That's it?  That's all of Zuccotti Park?

In point of fact, Zuccotti Park is one city block long, and one short block wide.  Less than a single acre.

How many people could fit into Zuccotti Park and fill it up?  Maybe a few hundred - or less, if you consider how much room is taken up by those permanent flower boxes, the trees, the tents put up by protesters, etc.

This is the whole big deal with "Occupy Wall Street", that our Accomplice Media has blown up so far, for so long?

Is "Occupy Wall Street" the cindy sheehan of protests?  i.e. without the media, there is little or nothing there?

Then they wonder why people call them biased.....

free` Just another case of fraud perpetrated on the American people. (10/19/11)


THE DEBATE: A QUICK RETROSPECTIVE

This is as short as I can make it:

-Romney:  A big winner.  Not only did he handle tough, questions, but he showed that he can take the big hits and give back every bit as much as he gets.  This should dispel any thought that Romney is incapable of being more than a whitebread corporate type, without any fire in his belly.  I expect his numbers to go up.

-Perry - Another debate disaster.  Months ago, when all I knew about Perry was his generic rsum, I thought he would be an extremely formidable candidate.  But after that Christians-only political prayer event in August, and his debate performances, it is clear to me that he is an empty suit with a full ego.  Bye-bye, Rick.

-Cain - He had his meteoric rise.  And this debate should be the start of his rapid descent back to earth.  None of the other candidates liked Cain's 9-9-9 plan, and they expressed what sounded like very valid reasons for rejecting it.  Cain's remarkable business and financial background, should make him a strong Republican asset in the coming election.  But not as a presidential nominee.

-Gingrich - Brilliant, visionary, but so demonized by the media and so flawed in his personal life that I can't see it happening.  Of all the things Gingrich said last night - and there were a number to choose from - my favorite was in the final minute when he took a dump on Anderson Cooper's head for how he ran the debate.  More on this later.

-Bachmann - Her surge is ended and she's going nowhere.  But she did get an endorsement from Wayne Newton yesterday (seriously).  Somehow I doubt that will create a massive resurgence for her prospects.

-Paul:  Has a relatively small cadre of unshakable loyalists who love everything he says and couldn't care less about his ugly, flawed history of votes on civil rights and Israel, or the support given to him by White supremacists.  They are all he has and all he's going to get.

Cooper:  Anderson Cooper ran a debate geared to have Republicans fight among each other, while their common target, Barack Obama, remained largely exempt from scrutiny, thus above the fray.  That is what Newt Gingrich called him out on at the end of the debate, and Mr. Gingrich was 100% correct in doing so.

Cooper's performance was disgracefully anti-Republican and pro-Democrat.  Then again, if you expected anything else from a CNN personality, you have to start paying more attention.